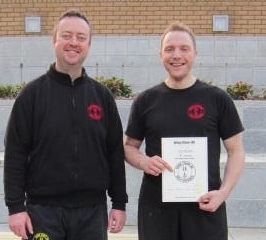 In 2003 my instructor introduced me to Yip Man Wing Chun, which immediately hooked me with its focus on the non-sporting, “real”, elements of fighting without any notion of competition. This led me to seek full-time training from Sifu Tam Woon Biu in China. I returned to the UK and continued training the Weng Chun Kung Fu system until I began training under Sifu Ed Pettitt both in class and as a private student from 2005. Reaching 4th Technician level in September 2016.

I began teaching my first class in September 2009 as both the next progressive step in my learning and in order to spread my knowledge of this system to others.”

Back to East Grinstead Wing Chun