How Wing Chun is taught: 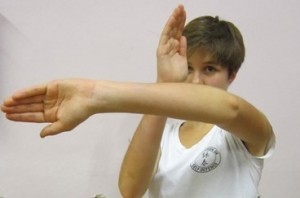 Siu Nim Tau (Little Idea) The first form we teach contains many of the fundamental defensive and attacking arm/hand techniques of Wing Chun.

Chum Kiu (Seeking the Bridge) contains footwork and kicks as well as combinations or flows of hand techniques.

Biu Jee (Darting Fingers) adds aggressive and dangerous attacking methods and emergency techniques, formulated for specific circumstances, to the already formidable system. In this form the student learns to use their body in a different way to the previous 2 forms. 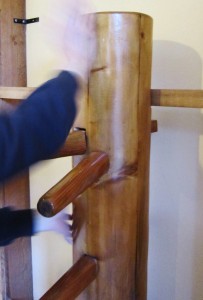 The Muk Yang Jong (Wooden Dummy) Form is trained on specialist apparatus and takes the movements and ideas a student has already learnt and shows how to combine and apply them in different ways and under different circumstances.

The Luk Dim Boon Kwun (The Long Pole) Form and the Bart Cham Do (Double Knives) Form are the two traditional weapons forms of Wing Chun. And the mechanics of these translate directly into the empty-hand techniques throughout our student programs.

Alongside these traditional training methods we also teach hand combinations and footwork patterns, which can all be practised alone and in the end help a student understand the structured grade levels more thoroughly. Combined they all aid in developing body coordination and flowing movement. 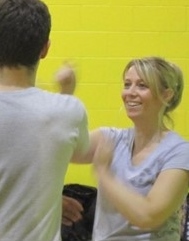 The vast majority of a Wing Chun class is taken up with partner training. This can take the form of striking against pads, specific self-defence scenario training, chi sao (adhering arms) training, or the practise of specifically developed sequences (“Sections”) of techniques which have been designed to develop coordination, visual and tactile reflexes, rhythm and a sense of flow from one technique to the next. It is important to note that we do not train solely Wing Chun versus Wing Chun, but also how to defend against other possibilities of attack.

Not only does a lot of partner training build excellent physical skills, but also a sense of camaraderie and friendship between students.

Not all wing chun systems teach sections. These were developed some 30 years ago by Grand Master Leung Ting as a training vessel to cover the many possible attacks one may have to deal with. You will find this method is solely used by past students from that lineage. We recognised the benefits of sequences having trained them for many years, and have now developed these sections much further. They constitute a large part of our syllabus. These sections or sequences are practised as a two man form, not to compete with each other, but to drill in the ability to respond instantly to any given situation using both tactile reflexes and visual recognition. Note: We teach sections at no extra cost unlike most other “academy” organisations.